I haven’t picked up a recurve since I completed my beginner’s archery course. As soon as I got my hands on my course completion certificate the club recurve was unceremoniously cast away in favour of the English Longbow and I haven’t looked back since… until recently that is. You see, over the last few months I’ve really got myself into traditional shaped rut. My form, I felt and was told, was good but I was struggling, and I mean really struggling, to hit anything that wasn’t bigger than Big Bird in anyway that even resembled consistency. I was crap and it was getting me down. Archery for me has always been about losing myself in the moment, to relax and forget about my troubles, to simply loose some arrows. Now I’m not competitive with others but I have expectations of myself which boil down to “if I’m going to do something, then I do it well” and recently I haven’t been shooting well.

As I wasn’t feeling “it” with my longbow I thought I’d try and shake things up, cleanse my pallet, and go right back to the start of my archery journey by picking up a recurve. The last and only recurve I’d shot was a beginners recurve, the type that get dished out to all beginners that all have the same characteristics of big thick risers with sloooooooooooooooow low poundage limbs that are in short god awful to shoot. Now I obviously didn’t want to recreate this experience but I did want to try a recurve again. 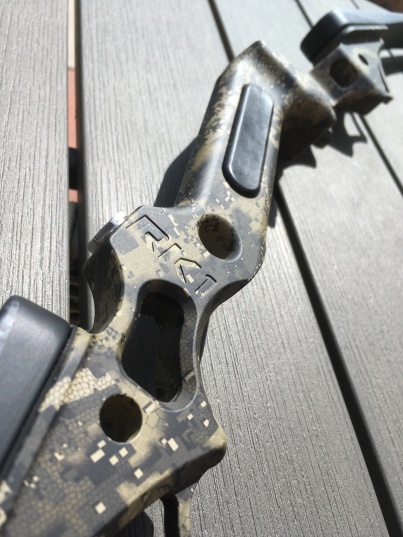 The foremost reason was that I wanted a pallet cleanser, something as different from my English Longbow that I could get whilst still maintaining a strand of “traditional” DNA. The RK1 ticked that box for me, the “traditional” DNA is supplied by Striker whilst ultimate pallet cleaner comes from the New Breed compound inspired aluminium riser. The second reason was that everyone who I’ve spoken to and reviews that I’ve read have all been positive and not just positive… really positive. The third reason, which is probably just as important as the others, is that the the RK1 looks absolutely stunning, it’s a work of art.

After several emails to Lale at Silver Archery – which involved me asking lots of questions and Lale replying with informative answers – I ordered the RK1 with recurve limbs. The bow took a couple of weeks to come from Striker in the States to Silver Archery in the UK and then to my door but overall the delivery time was very quick! So if you want an RK1 then get one from Lale at Silver Archery.

I’ve had the RK1 now for two weeks and I’ve shot it several times which is enough to get an initial impression and feel for the bow and to start to understand it’s character. It’s obviously not enough to really get to know the bows character but I’m in that happy place at moment of still discovering and being surprised by the bow whilst not knowing everything about it.

The RK1 comes with either the Striker made 60″ recurve or 60″ longbow limbs, both sets are glass and bamboo core laminates with a black hydrographic carbon fibre finish. If the finish doesn’t float your boat then you can get some custom limbs which have an exotic wood veneer, yum. The limbs are interchangeable with all Striker limbs so you can swap and change them to your heart desire. I went for the recurve limbs.

The 16″, fully machined aircraft grade 6061-T6 aluminium riser is made by New Breed archery. The riser comes in either black or dissolved camo as standard, again you can get custom colouring so if you have cash and the imagination you can customise the colouring to your hearts desire. My hearts desire was to go dissolved camo, for a standard finish it’s still very distinctive and noticeable without being covered in bright pink unicorns. I suspect that if you ask for bright pink unicorns then New Breed/Striker will be able to accommodate your request….. I now really hope that someone does get a custom unicorn RK1! You can also attach a quiver, sight mount, stablizer/bow fishing rig, side plate or arrow rest to this as the correct holes are where they need to be.

The bow also comes with an 18 strand fast flight string, string silencers (these are bees knees), a side plate, striker broucher and a Striker baseball cap (well at least mine did!).

The initial bow set up was relatively straight forward, however, when connecting the limbs, I did experience my first, of two minor, niggles with the RK1. Niggle one was that there was no Allen key include in the bag of bits to connect limbs to the bow. This wasn’t a major issue, as I just raided the toolbox and found one, but it would have been nice to have the key included. When you get a new bow and set it up for the first time, it is, for me a least, a really immersive experience and breaking off to go and find an Allen key pulls you out of that experience. Like I said this is just a minor issue.

So what are my impressions of actually shooting this bow? In short I love it, I mean really love it. My brain is still getting used to working out constantly where my bow arm needs to be in order to put my arrow in the right place. I’ve shot off my hand for so long that this may take a few weeks to get right but even after only a few sessions my groupings are tighter and consistent. The sight window on the RK1 is also really big which is very helpful and with the riser being so slim and the shelf so deep your arrows are pretty much sitting in the centre of the riser.

Speaking of the riser the grip is perfect, it sits and balances in your hand like it was meant to be there. The grip and the bow weight gave me the confidence to really relax my hold on the bow and open my grip up. I’ve never had that instant confidence and relaxation from a bow before and if I’m honest it did take me by surprise. My grip has opened so much that I’ve been using a finger sling when shooting the RK1 in order to get the most out of the push of the draw and flow of the release. The draw is also amazingly smooth at 28″ there’s no stacking at all, it’s an absolute pleasure to draw and shoot and to do that repeatedly.

As I’ve been opening my grip up and allowing the bow to follow through I thought it would be sensible to add a little weight to the riser to stop the top limb smashing me in my face during the follow through. I picked up a Trophy Ridge 6″ static stabiliser and attached that to the RK1 and …….wow! I actually didn’t think that the bow could feel any better but that little extra weight and stabilisation just improves the whole process from draw, to the release, to the arrow hitting…. which leads me to my second niggle about the bow. Include a hunting rod with the bow as a standard package. Again, that comes down to archers preference and I’m probably just picking holes here but including a stabiliser  would be the ultimate package.

In terms of arrows I’ve been shooting the Goldtip Traditional 400 carbons with a 100g point. These seem to fly straight but I may have a tinker with them. I suspect I’ll also try the RK1 with a bow quiver to see how that feels on the bow and I’m also going to pair it up Grizzly String Pro because they’re simply excellent strings!

In conclusion, this is a truly outstanding bow. I love it and I can’t see myself wanting to pick anything else up for a long time. It shoots exceptional well and it stands out, everyone wants to have a look at it and other archers have commented on the grip, the weight and the draw, and the comments have all been very complimentary. I was speaking to one of my English Longbow buddies the other night and he said “you look very at ease with that bow […] you’ve found your bow” which coming from someone who sees me shoot every week must mean something.